Updated regulations for the use of Bluetooth wireless devices on the Airwave network bring exciting possibilities for blue light users and the wider mission-critical communications community.

Bluetooth® is the world’s most popular standard for cable-free connection between devices over short distances*, and use of the technology is growing rapidly in public safety applications. These range from control room operator headsets and wireless remote speaker microphones to sensors used with Conducted Energy Devices that activate a body worn camera once the CED is drawn from its holster.

Until recently, however, the UK Home Office has not permitted use of this ubiquitous technology with Airwave TETRA radios. This restriction has been due to concerns about earlier versions of the Bluetooth standard that exposed users of the Airwave service to potential security vulnerabilities.

This situation has changed with recent iterations of the Bluetooth standard that address security as a foremost concern. Of particular interest from a mission-critical communications perspective, Bluetooth 4.2 and subsequent versions (including Version 5 as supported by the new MXP600 TETRA portable radio) offer major enhancements in encryption and authentication to resist various modes of attack by eavesdroppers. These advances are reflected in updated Home Office guidelines, published in January this year, that now permit the use of Bluetooth 4.2 and above - with Secure Connections Only mode - on the Airwave network in specific use cases, subject to a number of conditions.

This change in regulation will have a positive impact on blue light users and the wider mission-critical communications community, opening up new possibilities for Airwave – and the forthcoming ESN – to serve the evolving needs of tomorrow’s connected officers.

Secure Bluetooth connections can enable remote control and interaction between an officer’s TETRA radio and other devices. At its simplest, this could be a wireless earpiece that allows the police officer to hear colleagues’ voices with greater clarity in the noisy environment of a public event or at the scene of an emergency. The wide range of Bluetooth enabled hearing aids and audio accessories can be particularly beneficial for officers who may have difficulties listening to speech through the radio’s built-in speaker.

Enabling the use of Bluetooth on Airwave raises possibilities to connect other devices such as body worn cameras and digital notebooks directly to the network. There’s also the novel potential for interacting with the radio via an app on the officer’s Bluetooth-connected smartphone. This enables simplified workflows with mobile applications by reducing the need for frontline workers to keep switching their attention between devices. For example, accessing radio controls in very dark conditions via their connected smartphone screen may be easier and more convenient for an officer working at night.

As well as improving officers’ situational awareness and task performance, accessing radio functions via a smartphone also supports discreet operations by reducing interest in the activities of a plain-clothed officer by members of the public. 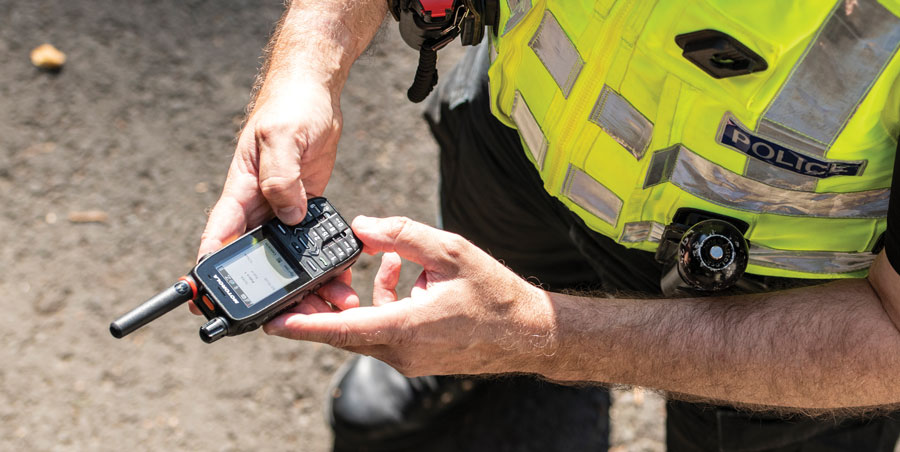 Light, rugged and easy to use, the MXP600 TETRA portable radio is designed and engineered to meet the mission-critical communication needs of today’s frontline workers. Support for Bluetooth® 5 with Secure Connections mode is complemented by powerful end-to-end encryption to resist interception by eavesdroppers.

Country Manager and Head of Sales

Connect with Fergus on LinkedIn

*Effective operating range between Bluetooth devices is anywhere from over a kilometre to less than a metre.