One Unified Operational View on a Powerful Client 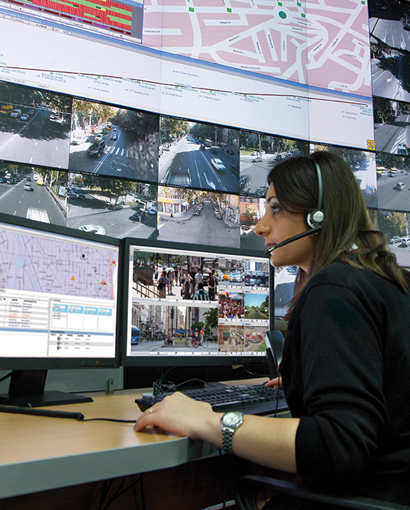 Real-Time Intelligence Client brings together streaming video with analytics, resource tracking, social media, voice, Computer Aided Dispatch (CAD) and records information onto a single, intuitive interface with geospatial mapping. The client allows an intelligence operator in a Real-Time Crime Center or other operational environment to communicate critical information via voice and data with first responders. Analysts and investigators can also use the RIC to support investigations after an incident or even to prevent one from happening. And, because it easily integrates existing data sources, CAD, video management and radio systems, you can leverage and extend your current investments.

Motorola understands public safety operations. Putting our knowledge to work, we designed and built workflows into the Real-Time Intelligence Client (RIC) to streamline the collection and distribution of incident-related information so you can increase efficiency, help intelligence operators in your operations centers to work smarter and improve real-time decision-making capabilities.

Aggregation and Distribution of Real-time Video and Data

The Real-Time Intelligence Client lets analysts prepare and distribute live tactical video, recorded video clips, documents, photos and key information to your officers in the field, and to other agencies for multi-jurisdictional response. Push-a-Link and Push-a Snapshot make it easy to distribute video and photos to dispatched units. Real-time analytics monitor video streams and detect user-defined events of interest – to improve response times by alerting RIC operators to crowd formations, dropped bags and other suspicious behavior as it occurs. And video synopsis allows hours of footage to be reviewed in minutes. These capabilities enable personnel in the field and the command center to have direct access to relevant information in real time for enhanced decision making.

Leveraging Motorola’s Advanced Messaging Service, RIC can easily connect to other messaging services, including ASTRO® 25 messaging and query, as well as third party CAD systems. RIC lets personnel securely create, address, send, receive and reply to messages. Attachments collected via the console, such as video clips, photos and text files, can be easily shared with dispatch, first responders or other personnel. Plus, users can choose how they want to receive priority alerts and updates, including information bubbles, audible signals or visual alerts.

The Real-Time Intelligence Client can connect to a Motorola Project 25 mission critical voice and data communication network through the MCC 7100 IP Dispatch Console interface, which allows users to monitor and communicate with multiple talk groups, as well as provides unit location and emergency status. With the ASTRO® 25 Advanced Messaging Solution the console analyst can send text data to radio users on the scene or en route to an incident.

Interfacing with your existing CAD platform, RIC pulls all incident information stored in CAD, including dispatcher notes, address information, snapshots and other related attachments. The system publishes vehicle location information so that GPS-enabled vehicles appear on the Real-Time Intelligence Console map. CAD incident and event/sensor information is also correlated to nearby camera sources for a single view of what’s happening.

Your personnel can quickly query and display results from multiple databases, such as your department’s Records Management Systems (RMS) and local, state and national vehicle and law enforcement databases. The console also provides immediate access to a wide variety of incident-related information and photos, video and other relevant files.

The architecture enables third-party event sources such as license plate recognition, gun shot detection sensors and advanced video analytics, like crowd formation or dropped bag triggers, to be integrated, reported and displayed on the map. Critical information such as status, type, severity, location is accessible when an event occurs, and RIC quickly associates incident and vehicle location information with nearby camera sources for ongoing event monitoring.

The Real-time Intelligence Client provides a police officer a user-configurable client view which integrates multiple disparate public safety systems such as video surveillance, CAD, LMR, and ALPR, into a unified public safety workflow to respond to a situation with real-time relevant information for improved decision making. It can be used in various use cases including:

While using RIC to watch live video streaming from cameras in a particularly dangerous area of town where drug deals often occur, a Real-Time Crime Center operator identifies a suspicious interaction. The operator captures pictures of the incident and sends them to dispatch where the appropriate response is initiated. The responding officers quickly apprehend the suspects and take them into custody, helping to keep the neighborhood safe.

Support a 9-1-1 Call with Relevant Radio

A mother makes a frantic 9-1-1 call reporting that her six-year-old child is missing from a community park. Dispatch identifies and sends the nearest police officers to the scene. An intelligence operator receives the alert from dispatch on his Real-Time Intelligence Client and pulls up a camera feeds in and around the park. Noticing that a white van seen on the street adjacent to the park shortly before the incident has left, the operator sends an alert and picture of the van to the responding officers' in-vehicle computers and handheld devices. With this fast action and quick response, the van is pulled over, the child recovered and the suspect arrested. And it is all done in view of the console operator who is monitoring the local camera.

Give Investigations a Boost

A multi-car accident occurs during the height of rush hour. Days later, a question comes up about a vehicle that reportedly fled the scene. From the Real-Time Intelligence Client, an analyst pulls up the video feed from cameras on the street corner, as well as at a bank in the area at the approximate time the accident occurred. The video shows the car that likely caused the accident fleeing the scene before officers arrived. The analyst immediately sends images of the car, license plate and identification information to the team investigating the accident.