DETROIT – May 23, 2016 – When officials with the Detroit Police Department realized 25 percent of violent crime in the city was taking place within 500 feet of gas stations, they turned to Motorola Solutions’ Smart Public Safety Solutions to combat the problem.

In the first few months of operation, analysts have been able to quickly identify suspects, leading to faster arrests. One example involves a suspect brought into custody less than two hours after being clearly identified on camera firing a weapon into a vehicle at a gas station and another where two suspects were arrested after a carjacking at a gas station. A third instance shows the cameras acting as a deterrent when two individuals in a dispute calmly leave the inside of a gas station shortly after noticing the Project Green Light signage on the station door warning of police monitoring with real-time video surveillance.

"Motorola Solutions' CommandCentral platform has become an invaluable crime fighting tool for our officers on the street," said James Craig, police chief, Detroit Police Department. "The fast pace of technological advances allows for partnerships like these to sustain safe neighborhoods for our citizens."

The project is one of the first public-private-community partnerships of its kind in the United States, blending a mix of Motorola Solutions’ real-time crime-fighting applications and community policing aimed at improving neighborhood safety. Detroit Police say the program is promoting the revitalization and growth of local businesses and strengthening the police department’s efforts to deter, identify and solve crime faster and more efficiently.

“Project Green Light demonstrates how smart public safety technology such as Motorola Solutions’ CommandCentral platform can assist police departments and be an extra set of eyes on the street,” said John Zidar, corporate vice president, Motorola Solutions Central Region. “The ability to stream live video to Detroit’s Real-Time Crime Center allows analysts to quickly send critical information such as a photo of a suspect or an image of a vehicle to officers in the field to help capture suspects faster and make the community safer.”

The CommandCentral platform is part of Motorola Solutions Intelligence-Led Public Safety application suite, which helps streamline the way agencies can use the enormous amounts of data coming in from sources such as 9-1-1 calls, social media feeds and nationwide databases to help increase situational awareness, reduce crime rates and close more cases.

Click here to see a video on Project Green Light 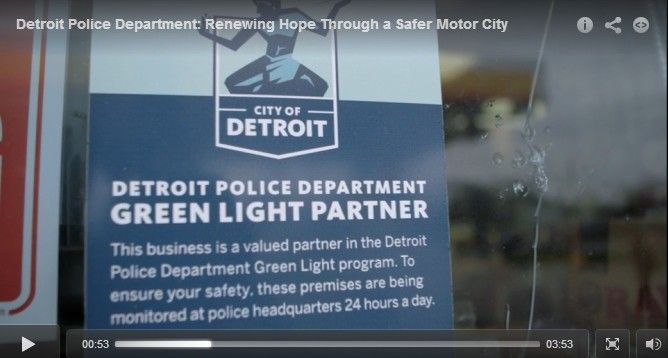